At Last ! Finished Books - At Work with Yarmouth Stores

At Work With Yarmouth Stores

Behind The Closed Doors of Manufacturing

Great Yarmouth Stores Ltd, which has developed the ‘Yarmo clothing’ brand, originally started in 1898 when several partners, including Johnson and Sons joined forces. They became world famous for making fisherman’s oil-skinned clothing and hats, lovingly referred to as ‘Oilies’ and ‘Sou’westers’, using techniques that can be traced back to 1801.

For centuries Great Yarmouth was a major fishing port, dependent mainly on herring fishing. With the abrupt decline of the ‘silver darling’ industry in the 1960’s, the stores were faced with the choice of adaptation or terminal decline, as sudden as the fish stocks they relied upon.

They started making industrial work wear such as boiler suits, aprons, railway jackets, smocks, and continue to do so today alongside innovative, variations of style which have become attractive to new markets such as Japan, with their love of utilitarian clothing.

The factory itself is steeped in history and is hidden amidst the bleak, looming industrial docklands of the South Quay of Great Yarmouth, the most exposed coastal town on the eastern flank of England.

The factory still reveals fascinating echoes of historic techniques and the origins of their brand. The original floorboards are stained and permanently marked by the very oils that once spilt from their application to make these characteristic garments, waterproof. 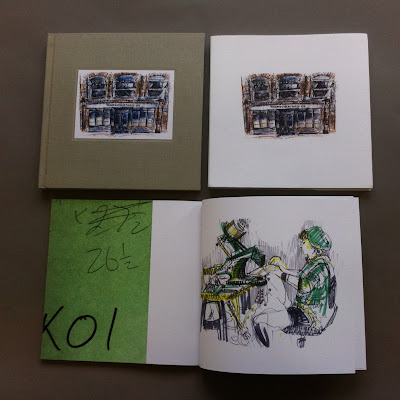 A series of limited editions of the book have been bound with the original blueprint patterns from the factory archive which are encased with a dust jacket for protection. I am really happy with the outcomes and have explored different ways of binding the books. The factory kindly funded the printing of a short run of the book in return for some copies. I had two case bound books made and a number of perfect bound copies. I still have some perfect bound copies available for £25 plus postage and packaging. If you are interested in purchasing one please email me:Jbolus44@gmail.com. 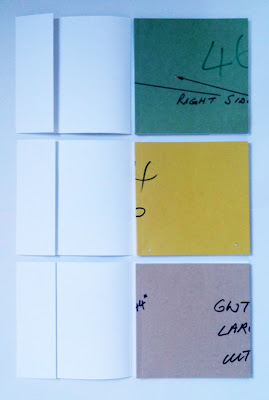 The work in this book was made on site in the Yarmouth Stores factory between the months of February and June 2016.

The drawings record both the daily activities of the machinists at work and the atmosphere and industry of the factory itself. My aim is not just to recall, celebrate and promote an important local and national industry, but also to draw attention to the lives of ordinary people, without whom nothing would be made.

What really struck me when I went to draw at the factory for the first time was the number of stages that a piece of fabric passes through before becoming a finished garment. Many skilled people from diverse backgrounds are involved, some with long family ties to this industry in Yarmouth’s factories.

I have recorded a flavour of some of the conversations I had with these individuals which offered insights into their working and personal lives that just looking could never tell.

An archive of the Pattern Maker’s blueprints are displayed all around the factory walls and contain layered notations, which are still sometimes used to guide the process of garment making. The beauty of these fragile blueprints were influential with regards to the choice of media and the vitality of marks I have used while sketching on site. These appear as photographs juxtaposed along side my work and form a dialogue between pattern maker and illustrator delivering part of the narrative throughout the book.


Below is a selection of page layouts from the book. The blueprints dart across the gutter like a machine moving across the fabric. 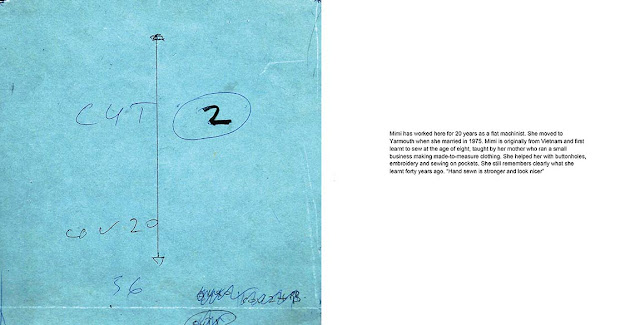 Posted by Unknown at 12:25 No comments: Links to this post

More sketches from my Artist in Residence at Yarmouth Stores Factory 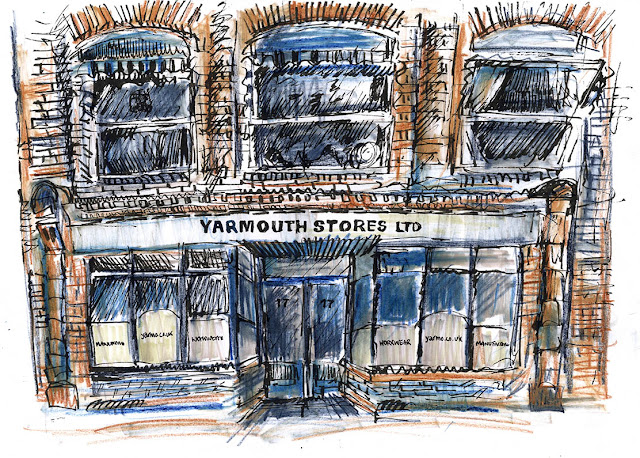 The Front of Yarmouth stores factory for the front Of my book. 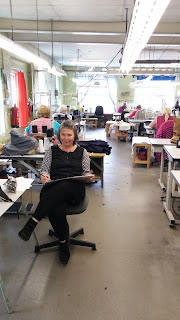 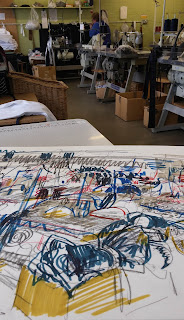 Sketching in the Factory 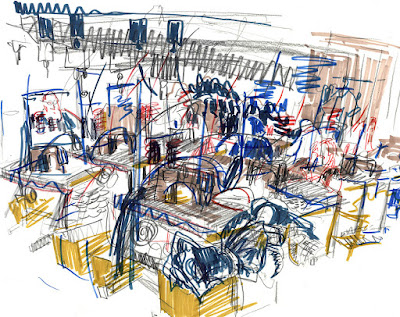 I tried to capture the mood of the ordered chaos of the machine room. Reminds me of a stormy sea. the rhythmic sounds of the machines bursting into action. This room was in complete contrast to the calmness of the cutting room downstairs where you could hear the heavy clunks of stud machine overhead. 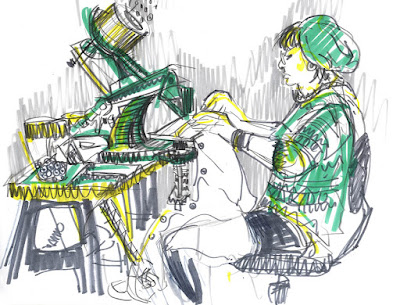 April on the Stud Machine 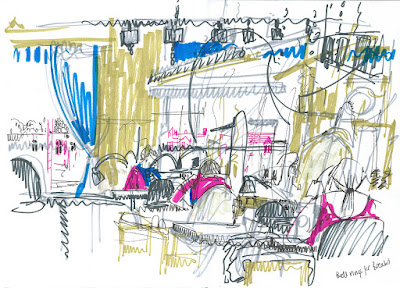 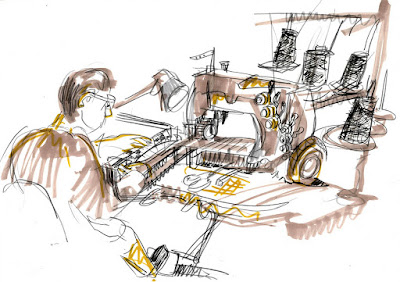 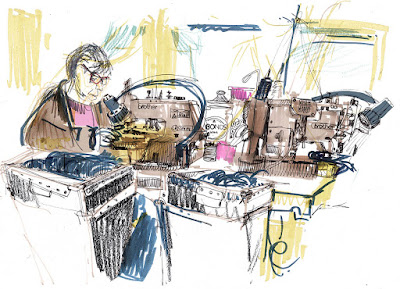 Pauline is in charge of the finishings like buttons and button holes.


Posted by Unknown at 12:25 No comments: Links to this post